Quite an amazing book about Lincoln's "indiscretions" as 16th POTUS.  The book flies in the face of the "Lincoln Scholars" perspective.  I have long said that Lincoln was one of, if not the worst Presidents this country has ever had.  I know this subject is controversial to some, however if you open your mind and read this book with an open mind, you WILL at a minimum need to question your belief in "The Great Emancipator". 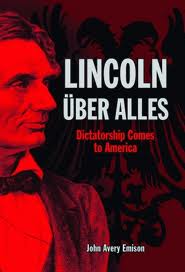 Mr. Emison blows the lid off of the "conventional" Lincoln story.  The book focuses on the many of the Unconstitutional and even treasonous acts committed by Lincoln and his minions.  Although many reviewers comment on the "German connection" made by this author, I found that there was one chapter about it and then sporadic mentioning in the latter chapters.  The majority of the book is about Lincoln's interpretation, and subsequent disregard of the Constitution and the concept of State's Right and sovereignty.

The book explores the incongruous statements by Lincoln sympathizers past and present.  The author gives you examples of "Lincoln Scholar" authors and their statements and shows you how their arguments do not hold water.

My opinion is based on many books I have read.  When viewing secession of the Southern States compared to the secession of the original 13 colonies, it is clear to see that the South was well within their rite to dissolve their affiliation with the Northern States.  Mr. Emmison explains the basis of "equal footing" where all additional states brought in after the initial ratification were so brought in on an "equal footing" as the other existing states.  In addition to that, there was a lack of "unmistakablility" by the States in the Constitution.  Finally the precedent of Legislative Entrenchment makes it clear that no previous legislative body could have more power that any future body.

With all of the aforementioned, it is clear from this book and many others that the North were the aggressors in this conflict.  The North wanted to subdue and overthrow a duly elected government by force.  It is clear that the war was not fought to free slaves as per the words of Mr. Lincoln himself and the actions he permitted as the commander in chief.

I enjoyed this book because I am one of those who believe Lincoln was wrong for our country(s) and gets way too much credit for things he did, said, did not say and did not do.  Most of the books about Lincoln try to show him as deity and that he could not do wrong.  Those with even an elementary level of knowledge can see through that veil.

The book is well written and I enjoyed it greatly.