In the spirit of disclosure,  I started to write this review as I read the book.  Thinking the subject matter would end with the civil war.  Anyone who has read my reviews will know that Lincoln was not one of my favorite POTUS'.  I also do not agree with the premise that the "Civil War" was fought to free the slaves.  I also dont like the attitude the North takes/took as if they were somehow anti-racist because some of the were anti-slave.  With that being said.  Man was I wrong about this book.

Interesting book regarding how Arlington Cemetery came to be.  Ironically, the land on which it sits belonged to George Washington Parke Custis, George Washington's step-grandson and adopted son.  Mary Anna Custis Lee (his daughter and wife of General Robert E. Lee) inherited the property after the death of her father.

At the onset of the war, Robert E. Lee left his wife and home and headed South to fight in the Confederate Army.  Mr. Lee realized that Arlington House was in a very strategic location and would soon be overtaken by Union Soldiers.  He warned Mrs. Lee to collect the valuables and leave Arlington.  She heeded the warning and left to family eventually making her way to Richmond, VA (controlled by the South). 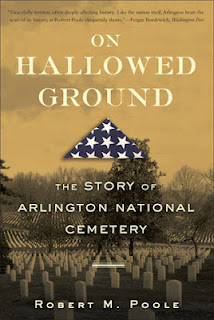 President Lincoln decided that he would tax those in VA a high tax for their property in hopes of having the owners default and the North take ownership of those lands.  Mrs. Lee sent a family member to pay the tax in full, and the office taking the payments insisted that it be Mrs. or Mr. Lee in person.  Montgomery C. Meigs, who hated General Lee, the Union Army's Quartermaster, decided to inter the bodies as close to Mrs. Lee's garden and as close to the home to ensure that the Lees would not be able to inhabit the home lest they wanted to live with the ghosts.

Eventually, General Lee's son, George Washington Custis Lee assembled a successful case against the United States claiming that the U.S. illegally and Unconstitutionally took the Lee's homestead.  The government paid the Lee son for the property.

This book proves that the all mighty "North" was not as great as they purported to be.  We see time and again how the North treated the South.  How the Southern soldiers, the very same the North wanted to stay in the union at all costs, did not allow for the southern soldiers to be interred in Arlington.  The blacks that the North claims to have gone to war for where called "contraband", forced to live in shabby shanties and were denied proper interment into Arlington.

This book was amazing.  I learned so much about the different wars and "conflicts" that I have an entire list to add to my 'to read' list.  The chapters on the "Unknown Soldiers" were amazing.  I did not know that the Vietnam "Unknown" was identified and now sits empty in Arlington.  It is impossible to do this book justice in such little space.  Read it, you will love it.

The saddest part of this book is that you see just how many people are affected by war.  If we continue the Jingoistic views, we will soon require an entire state to bury those lost in wars.

Posted by Manny Fernandez at 11:10 PM