This was my first of Ray Bradburry's work I have read.  The writing style is not what I am used to reading.  The book takes place in a dystopian society where people do not read books, as a matter of fact, it is illegal to do so.  Firemen, in this society do not put out fires, they actually set them. 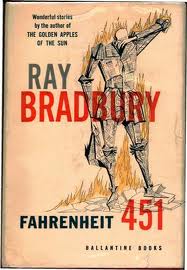 The book revolved around the awakening of Guy Montag which witnesses many life altering situations from meeting a young girl that is not scared of him and he connects with later to find out she has died (although book is unclear); to his wife's botched suicide, to the burning of an old lady by her own hand when the firemen come to burn her books.  The ever pressing WAR which weighs heavy on Montag throughout the novel. He questions the logic behind not reading books and eventually falls prey to their power, which eventually while bring about his potential demise.

Its funny to read books from older periods where they try to predict the future.  Compared to what we have today, this would be "lame".  Not a long book but certainly good.  I enjoyed it.