This is a touching story about the bravery and resilience of a person who has charged himself with beating the odds.  I believe biographies are the best books to read and this one only strengthens that belief.  Fox is a funny person in-spite of his obvious predicament.  This book covers his struggles with his personal, family, and public life and how this debilitating disease has in someways helped him to become a better person.  I find it remarkable that he is able to say that. 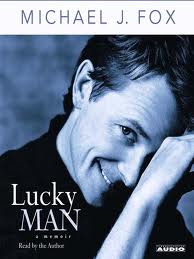 One of the interesting things I found out by reading this book is that ironically, not only was Fox really bad in school save drama, music and art he actually dropped out of high school to pursue his career in acting.  Born and raised in Canada, he like others knew that to conquer "Hollywood" he would need to make a journey.

Fox describes the whirlwind life he lived with substance abuse as well as his own self-destructive tendencies not to mention the hidden life of Parkinson's Disease.  Fox tells the tail of having to figure out when he needed to take his meds to ensure he would not find himself "off" as he puts it.

Fox tells of his first signs of his disease, the surgery he tried to quell the tremors as well as the realization that the disease "was doing what it was suppose to do" referring to progressively taking over his body.  He described the difficulty of working in a career where he was in the public eye and hiding a dark secret that could end his career while popping medicine routinely to get through the next scene.

Later when Fox was unable to work as before, he took on a role of the face of PD.  He sat before a Senate sub-committee twice to lobby for funds to help research for the disease.

A couple of things I want to note that is outside the review of the actual book.  The amount of money that out government flushes down the toilet on wars, programs that are not reviewed, tracked and unfunded if no producing while we have the ability to help those in need here in our own country.  I would rather close the 900+ bases overseas, stop foreign aid, kill useless programs, scale back the government and use some of the saving to help fund cures for diseases.  I support the stem cell research because I am diabetic and I too, could be helped by its research.  Especially when the embryos are discarded anyhow.

The second thing is, Barbara Walters is a $&@*.  During a pre-interview with Fox, and as he was leaving, he struggled to get his jacket on.  She asked him if that was because of the PD, he answered, Yes.  She wanted him to show the audience during the interview how he struggled with the jacket as if he was a circus act.  Has she no shame?  The man is pouring out his guts on an already difficult thing and now you want to exploit him for you ratings.  Fox's wife stepped in and said NO WAY.  Well Played Tracy, well played.