I Heard You Paint Houses: Frank "The Irishman" Sheeran and the Inside Story of the Mafia, the Teamsters, and the Final Ride of Jimmy Hoffa


This was an interesting book. I have never been into the "Hoffa" genre, but this title called my attention.

The book is the story of Frank "The Irishman" Sheeran.  Sheeran was former soldier that came back from war to find himself looking for work. He soon hooks up with the mafia, without knowing the extent of what the mafia was. 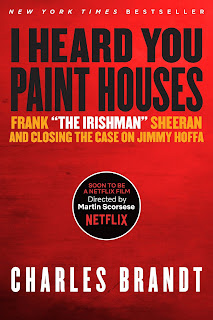 Sheeran was "a friend" of Russel Bufalino, a known mafioso. Although Sheeran was friends with Hoffa, he had an allegiance Bufalino which surpassed any friendship to Hoffa.

The book tracks the rise and the subsequent fall of Jimmy Hoffa regarding the Teamsters and the "witch-hunt" from Bobby Kennedy as US AG.  The author tells the tail of the murder of Hoffa at the hands of his friend "The Irishman".  Before his death, Sheeran is on record corroborating the contents of this book being accurate.

This book has been made into a movie soon to be released in 2019 by Netflix. I will surely watch the movie.
Posted by Manny Fernandez at 11:55 PM