Untied: A Memoir of Family, Fame, and Floundering By: Meredith Baxter


The beautiful, Meredith Baxter's brave memoirs.  Her life story is fraught with disfunction and pain which eventually led to her multiple marriages and alcohol abuse.  Baxter-Birney, as she was known after marring David Birney.  David Birney, probably the worst offender in causing Baxter's pain.  He repeatedly physically and emotionally abused her.  Although Baxter "outs" him for the abuse, she glosses over the amount of times he actually beat her. 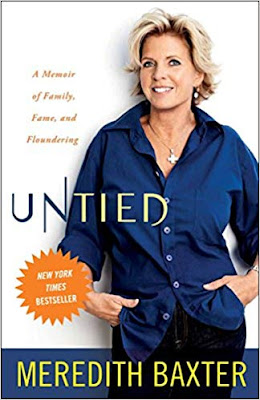 Although David Birney was truly a scumbag of the highest order, he is not the only one that caused her pain.  Early on, Baxter's mom made her children call her by her stage name, Whitney Blake.  Baxter tells the story of coming home from school one day and saying "mommy, I'm home" and got no response, she then repeats her statement, still finding no response.  It was not until she said "Whitney, I am home" that her mom responded.

Seeing her on TV, you would never have imagined the abuse she hid for so long.  She recalls the different projects she worked on which was a little difficult since she is much older than me and I found myself Googling some of the actors and actresses she mentioned by name. Additionally, I had never heard many of the movies and TV shows she mentioned.

She had dabbled in homosexuality early on before she jumped feet first in being a "lesbian".  Even living her gay lifestyle, she still struggled to stay in a relationship.

Baxter was a beautiful young woman and even in her old age, she is still sexy and as gorgeous as she was before.  She has 5 kids; two  (Theodore and Eva) from her first marriage to Robert Bush.  In 1971, she divorced Bush.  She later married David Birney and had three children, Kathleen and fraternal twins Mollie and Peter.  Baxter struggled to be a better mother to her children than "Whitney" was to her.   Baxter came out to the public at the age of 62 which is pretty brave.

I recommend this book.  This is a good primer for how not treat someone you are in a relationship with.