The Princess Diarist By: Carrie Fisher

The last book written by the late Carrie Fisher, best know as Princess Leia in the epic saga known as Star Wars.  I thought this book would be a "tell all" book about the secrets behind the scenes look at Star Wars.  The actual book should have been named "My Affair with Harrison Ford". 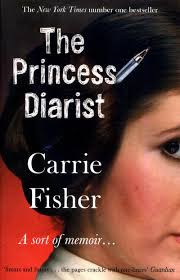 The book was entertaining.  Fisher does have a darker sense of humor than what you would imagine from her role as "The Princess".  I really did not follow any of her other work save that of the Star Wars saga.  Seeing her drop profanity was interesting.  The book drags on about her relationship with Harrison, or as she made it abundantly clear in the book "Carrison".  The latter part of the book is the actual diary entires which drone on and on.  One of the tings I realized is that my journal/diary entries are boring and elementary compared to hers. The book glosses over her childhood and her early carrier in Shampoo.  Looking now at IMDB, I can see that I have not really followed any of her work except for Star Wars.

Apparently, losing her daughter was too much for Debbie Reynolds died of a stroke a day after her daughter passed away of a heart attack.  A sad ending to an era.