The Republic of Pirates: Being the True and Surprising Story of the Caribbean Pirates and the Man Who Brought Them Down By: Colin Woodard


This was a fantastic book.  I have always been fascinated by pirates and have read dozens of books, fiction and non-fiction and this is one of the best.  Actually, I started getting into pirates about seven years ago.  Woodard is engaging and the book has a great flow to it. I was on a business trip and read it in a couple of days.  I will not lie to you, I usually take the side of the pirates.  I always saw them as revolutionaries and "taking it to the man". 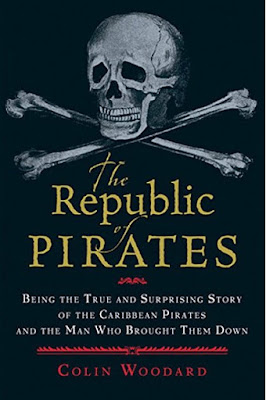 Woodard covers the 17th and 18th century pirates.  Most intriguing was Edward Teach (A.K.A. Blackbeard) and Charles Vane.  Woodard spins the tale of the pirates, before they were pirates and in may cases what led them to "the pirate's life for me" way of life.  For many it was rebellion for others it was part of their DNA.  Some were Navy Sailors and later became pirates.  In addition to the pirates themselves, Woodard also talks about the politics of the time and the Pirate Island of Bahamas, Madagascar and Jamaica.

Woodard paints the pictures of the battles and skirmishes in detail to allow the reader to visualize the acts.  No pirate book would be complete without the tail of the defeat of said pirates and the subsequent hangings of the same.  Reading the demise of Blackbeard actually made me sad.

This is a great book for anyone "into" the Pirate Lore and the history surrounding the pirates.

Posted by Manny Fernandez at 10:09 PM